I am a suburban housewife.

We went to birth mom’s court hearings.  I wasn’t sure what to expect, except that I watched The Practice and I remember my mom watching LA Law.  So I knew a little bit of how court works.  I’m not an idiot after all.

And then The Practice quickly turned into Night Court.  Not at all what I had expected.

For a suburban housewife, the only handcuffs I am used to are the ones that come in a package complete with holsters and little black cowboy guns with orange tips on the end.  Here sitting in front of me are 2 rows of convicts with bright orange jumpsuits all handcuffed and chained together with very large chains.

I am completely out of my element here.  Even sitting in the “audience”, I am out of my element.  It is a completely different world than I am used to.  No judgment from me….just an observation.  One of the difficult realizations:  so many were just MONTHS older than my son.  So so young.

I was there to testify at an Aggravated Hearing for the birth mom’s sentencing.  She pled guilty to child abuse by injury and waved a jury trial to have the judge sentence her.  Again, all of this is new to me.

And they wanted ME to testify.

Terrified does not even begin to describe what I was.

When her turn came, she was moved out of the row of seats holding the other inmates, to the seat in front.  My name was called to testify, and I had to walk directly in front of her….she could have tripped me I was so close to her.  Again, terrified….not of her, just the surroundings in general.

The Prosecuting Attorney asked me question after question about my beautiful Jeremiah.  “How old was he when we got him?” (3 months) “Where did we pick him up from?” (Local hospital after he was released after 3 weeks in Intensive Care.)  “What was it like bringing him home?”  (SCARY!  He was so fragile!  He cried a lot.  A*LOT*!  I did a lot of holding:  cooking, cleaning, sleeping, I held him.  He had days all he did was cry from the pain.  He still has days like that.) “Was there any special care needed for him?  Any special instructions?”  (He had to have lovenox injections in his stomach twice a day, exactly 12 hours apart.  If we missed one, the blood clot could move and he could die.  We carried a cooler with us whenever we left the house to ensure a dose would not be missed.  Every day, EVERY day, our goal for him was:  DON’T DIE!  Just DON’T DIE!)  “Does he have any lasting effects from the abuse?”  (Epilepsy.  He has epilepsy which he takes medication for.  He will take it the rest of his life.  We carry an emergency backpack with us wherever we go just in case.  He’s already had a seizure at Church in the nursery.  It’s just something we all have to live with.) “What is his prognosis for the future?”  (We have no idea.  Every day is a gift from God.  If he is mentally retarded, we have to be OK with that.  If he reaches an age and progresses no further, we are OK with that.  The future cannot be known.)  “If sentencing were up to you, how would you sentence her?”

At this question, my heart stopped.

How do I answer that?  Laws and sentencing I don’t know.  I only know Jeremiah.  I only know that his life has been forever changed because of what happened to him.  It never goes away for good behavior, the scar on his head will never fully heal even after a sentence in jail is finished.  The boy he was died that day.  The boy that is left is what he will be forever.  I cannot sentence her in years, I only know Jeremiah will forever live his days effected by the atrocities done to him.

And that is how I answered.

At NO time during my testimony did his mother look at me.  She stared straight ahead.  Never showed emotion, never winced with a memory or regret.  I couldn’t look at her, even though she was sitting close enough I could have spit on her if I had so desired, I couldn’t look directly at her.  I could see her in my peripheral vision, which was hard enough.  I looked at the Attorney who didn’t scare me; my body was shaking bad enough as it was!

It was a terrifying experience for this Suburban Housewife.

I went back to my seat and sat down and listened to the rest of the hearing.  Devastating to THIS Momma’s heart.  We learned that it was not the first time she had abused one of her children.  It wasn’t even the second.  Sitting in the very back of the courtroom listening to the Attorney recount the birth mom’s confession of what she did, then tell of her 2 year old daughter (at the time) that came in with marks all over her back and torso and legs….then 3 months later being turned in by her 10 month old son’s physicians (at the time) for neglect….then hearing that my beautiful Jeremiah wasn’t the only one abused that day….all of it was new to me….and all of it left me with tears streaming down my face.  I remember twice hearing a sob escape my lips.  It was just too much for my heart to hold in.

Not once did she react.  She stared straight ahead and did not react.

Words just cannot express the pain I had that day.  I was such a mixed bag of emotions all rolled into a heart that could not hold it all in.  Sentencing was finally handed down…..

Then, she reacted.  Then she broke down and cried.  Only then when she realized she was NOT going home that day did she crack.  Not in remorse for her actions, but in realization that she was not going home as she had planned.  That was hard to see, hard for me to witness.  Don’t cry over your lost freedom, please don’t do that.  Weep over this beautiful baby that will never be the same.  Weep for him, please don’t weep for yourself.

Regardless over why she was crying….it was hard to witness her sobbing.

And then, something I was ill-prepared for:

She turned and glared at me.  Not once, but several times.

I saved your children from a terrible future.  I nursed your children to health.  I love them like they were my own born children.  I sent pictures to your family knowing you would get them.  And I am a doggone NICE lady…glaring at me was the same as a punch in the gut.  And I guess it still effects me.

Blame someone, ANYONE, when you cannot come to terms with the monster you were.

And somehow, God turned this into something beautiful, something wonderful…..a blessing.  Sitting in front of me as I sat as-quietly-as-I –could sobbing….was a news reporter.  And, as I sat sobbing, she turns to me and asks if she could interview me….in all of my mess, and TRUST.ME, I was a MESS!  And out of that interview came a very unexpected gift:  a new addition built onto the back of our house;  I have a teenager already ready and waiting for a room!

The next little gift from God:  the birth mom was moved to a certain part of the jail where she is able to attend the ONLY Celebrate Recovery….and she is going!  Yes, that may sound like a strange “gift” for me, but it is.  My heart doesn’t hold malice for this woman.  Hers was a life wasted, but with God, she can become the woman REDEEMED by His grace!  God can raise her out of the ashes that was her past and clothe her with JOY and GLADNESS.

And that is what I want for my children’s birth mother.

Even though that day was terrible to experience, it was a life lesson for me:  I am a Suburban Housewife, and I thank God for it! 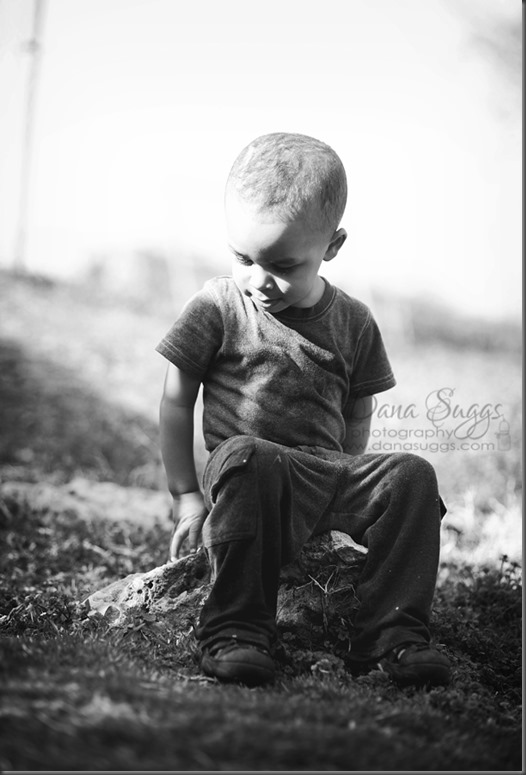 So today has been a RUSH of emotion!  Lots and lots of tears!

Today was the day the Suggs family grew by 6 feet!  We are so proud to announce the additions of Lizzie, Jaxon and Jeremiah! 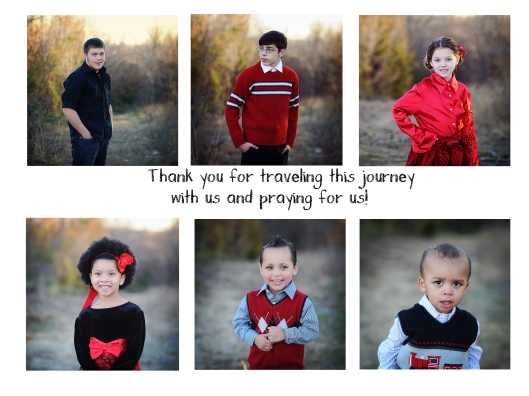 I will have to blog more about this.  So many many emotions today!

Do you know what you felt when you were finally able to leave that hospital with your brand new baby?  You walk in your home with that brand new baby with all of that knowledge that there is no staff to help if you need it, you don’t have to answer to ANYONE now, and that freedom of knowing they are all yours?

Only, we’ve been cooped up in that hospital for 18 months now and we’ve just been released!  Good and scary feelings all at the same time.  Sometimes having someone to ask questions to is really nice!  But not having to answer to someone for EVERY drs visit or trip to the next town over is really really nice!

They won’t be leaving.  No one is going to come and take them away from me.  They are mine.  So amazing.  They aren’t going anywhere!  Such RELIEF.

And don’t worry….God is definitely not finished with us yet.  He has already placed us in the path of another young person in need of a good, loving home.

So don’t stop praying for us! 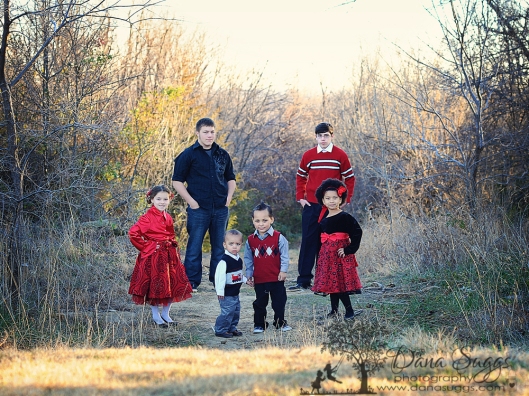 To the Sunday School Teachers Using an ordinary person Into the Wilderness Is that smoke cuz I'm on FIRE Just me, only better Put the crystal balls away Bible with a side of Life Please, just please don't Parenting is not easy Unlovely Lord, BLOW me away Challenge time Listening for that still quiet voice That Mother's heart What defines me Sins of the mother The dress The MOST searched for post: Hail to the fat chicks!